The United States government, headed by President Donald Trump, aims to have 20 Million COVID-19 vaccines from Pfizer’s 90 percent accurate dosage by December. This is under the plan of action called “Operation Warp Speed,” aiming for 20 to 30 million doses a month by next year; however, it would require emergency approvals from the US FDA.

The US government is gearing up for the entry of December as it nears the time where the promised COVID-19 vaccine would be in the hands of the heads of state. The leading COVID-19 vaccine manufacturer, Pfizer, recently reported a 90 percent accuracy in its third vaccine concoction phase.

The American multinational pharmaceutical company, Pfizer, remains on the virus’s testing stage and is not yet ready for its final product to be released in public. However, the US government’s Operation Warp Speed is now asking for 20 million COVID-19 vaccine doses by December’s end.

According to CNet, Pfizer would have to apply for the US Food and Drug Administration’s (FDA) emergency approval to produce the 90 percent accurate vaccine. The Trump administration and government rely heavily on Pfizer’s COVID-19 vaccine, which is currently leading the world in immunization development.

Pfizer works together with BioNTech SE to procure the vaccine for its home country and bring the immunization right on its doorsteps. The vaccine that both pharmaceutical companies created is one of the most trusted in terms of efficacy and usage in the COVID-19 vaccine race.

Pfizer’s logo is reflected in a drop on a syringe needle in this illustration taken November 9, 2020. REUTERS/Dado Ruvic/Illustration

Operation Warp Speed heavily relies on its vaccine manufacturer of choice to deliver President Donald Trump’s promise, who previously claimed that there would be immunization doses by 2020’s end. Pfizer is currently applying for the sought after emergency approval from the FDA.

However, despite the government’s rush to get its hand on the vaccine, Operation Warp Speed’s Chief Gus Perna believes that there would be people who would reject to take the vaccine. Anti-vaxxers and people who fear the effect of the first vaccine’s administration would pile up and discourage the administration in the immunization campaign.

Pfizer claims that after it has received a go-signal from the FDA’s emergency approvals, it would create a massive 50 million doses available right before 2020 ends. Additionally, the company would be able to produce 1.3 billion quantities by 2021.

The vaccine procured by Pfizer is the creation, venture, and efforts of the pharmaceutical company and did not receive funding from the United States’ government or the Operation Warp Speed. The company was only chosen by the country’s COVID-19 plan of action.

Pfizer’s COVID-19 Vaccine: How Would it be Administered? 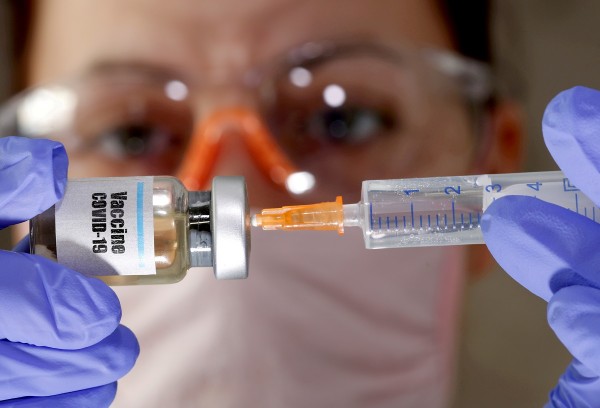 (Photo : REUTERS/Dado Ruvic)
A woman holds a small bottle labeled with a “Vaccine COVID-19” sticker and a medical syringe in this illustration taken April 10, 2020.

The American pharmaceutical’s vaccine is an mRNA-based vaccine discovered to have no severe effects on individuals of diverse backgrounds during its testing phase. Pfizer said that it based its results on individuals who have no known history of the coronavirus before vaccination.

The company’s COVID-19 vaccine is a 2-shot procedure that requires an initial vaccination and a follow-up one after three weeks.

Pfizer is currently awaiting its greenlight for producing a massive 50 million dosages this 2020 and, hopefully, by the end of December for the country’s immunization program.