Health care workers across the country have started receiving COVID-19 vaccines, but doctors and nurses at some of the nation’s top hospitals are raising the alarm, charging that vaccine distribution has been unfair and a chaotic “free-for-all.”

At hospitals in Massachusetts, New York, Arizona, California and elsewhere, medical professionals say that those with the most exposure to COVID-19 patients are not always the first to get vaccinated. And others who have little or no contact with COVID-19 patients have received vaccinations.

“It definitely feels a little bit like a slap in the face,” said Jennifer DeVincent, who has been a neonatal intensive care unit nurse in the prestigious Mass General Brigham hospital system for 16 years and attends deliveries with coronavirus-positive mothers.

At Mass General Brigham, the plan was for hospital staff to use an app to sign up for vaccinations. Everyone is sorted into different “waves” meant to prioritize those most at risk. However, the plan relies on the honor code, and internal emails obtained by NPR instruct employees to “self-police.” 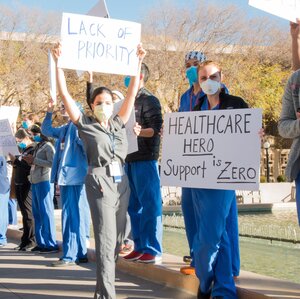 There were problems from the beginning. The app crashed when too many people tried to sign up at once. Then, when it was up and running again, all the appointments were snapped up within minutes. DeVincent was taking care of a patient the entire time appointments were available. Some night shift workers at Mass General Brigham woke up to learn they had slept through the announcement of the new system and the sign-up windows.

“It turned into somewhat of a free-for-all,” DeVincent said. “Those that work the most have had the hardest time getting an appointment because you can’t always log on at that exact moment.”

DeVincent said her frustration turned to anger when she realized exactly who was getting the shots: Some of the first to be vaccinated were managers, coordinators and others who do not do hands-on patient care.

“It makes me feel awful that anyone feels anything less than fully valued,” said Paul Biddinger, medical director for emergency preparedness at Mass General Brigham. He acknowledged the challenges and miscommunications, saying they should have managed expectations better given the limited number of doses available. However, he said, the honor code is necessary for an organization with a staff of more than 80,000.

“It’s actually relatively complex to figure out who is working where,” he said. “We have staff who move among our hospitals and work in different roles in different hospitals.”

Biddinger has been going through the data and said it’s relatively rare for people to jump the line and usually a misunderstanding. He said they’re working on making the guidelines clearer and fixing issues in the app.

While vaccine rollout has gone smoothly at many hospitals, similar challenges have arisen at places such as New York-Presbyterian and Stanford Medicine.

In Arizona’s Maricopa County, the county government is responsible for distribution. While the county tried to survey health care workers and prioritize them based on various risk factors, many have scrambled to find workarounds. Rumor proliferated about a link that was supposed to be private but let anyone get an appointment. Same with a phone number. One doctor, who requested anonymity for fear of retribution, called the Maricopa County rollout “a bit disorganized and ripe for exploitation.”

In New York, a doctor affiliated with Northwell Health conducts 10 or more COVID-19 tests a day on patients but has not been able to get a vaccine appointment.

“It’s really very upsetting,” said the doctor, who also requested anonymity for fear her residency privileges would be taken away. “Throughout this whole pandemic, I’ve never felt so dejected as I do right now.”

The doctor said Northwell – a network with 23 hospitals and 74,000 employees – has not been sharing much information. The main communication, the doctor said, is: ” ‘Wait your turn, and you’ll get invited when you get invited.’ ”

While waiting, the doctor saw colleagues, such as radiologists, posting vaccine selfies on social media. “Many of these physicians are people who either work remotely or work in fields where they are not treating COVID patients every day,” the doctor said. “There really seems to be no rhyme or reason to who is getting vaccinated.”

But Mark Jarrett pushed back, insisting there’s a detailed rollout plan. As the chief quality officer and deputy chief medical officer at Northwell, he said, “This is a monumental task that we’ve never had to do before.”