Six in 10 Americans believe the U.S. healthcare system is in a state of crisis (16%) or has major problems (45%), the lowest in Gallup’s trend since 1994, except for a 2001 reading. The figure was closer to seven in 10 from 2003 to 2018, but had dropped below that last year, even before the coronavirus pandemic plagued the nation. 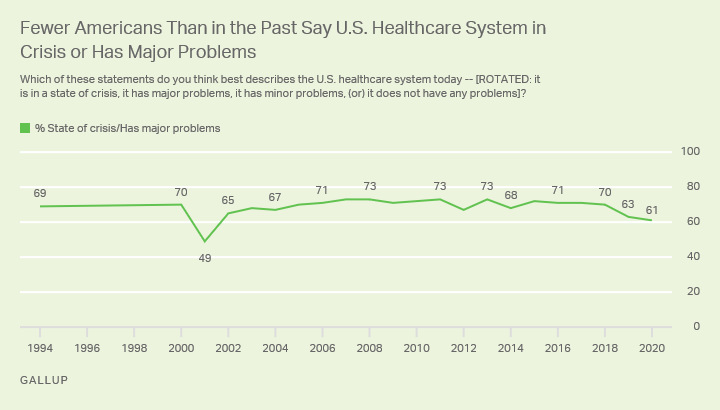 The unusual finding of 49% rating the healthcare system a crisis or major problem in 2001 was recorded two months after 9/11. At that time, Americans’ perceptions of many issues being a problem were suppressed, and they were rallying around their leaders and U.S. institutions. However, the percentage expressing significant concern about healthcare crept back up to 70% by 2005 and subsequently remained near that level until it dropped in 2019.

Most of the change in attitudes about the healthcare system since 2018 has come from a reduction in the percentage saying the system has major problems, which has been at or above 50% in all but 2001, 2019 and 2020. The 16% who believe the system is in a state of crisis matches the trend’s average going back to 1994.

In addition to the 61% of Americans today who are critical of the state of the healthcare system, 35% believe it has minor problems and 3% say it does not have any problems.

These results are based on Gallup’s annual Health and Healthcare survey, conducted Nov. 5-19. The survey also found Americans’ satisfaction with healthcare costs at a new high and approval of the Affordable Care Act tied for the highest it has been.

Consistent with that pattern, 43% of Republicans, compared with 78% of Democrats, believe the U.S. healthcare system is in a state of crisis or has major problems. The 35-percentage-point gap in Republicans’ and Democrats’ ratings represents one of the largest in the trend, along with the 37-point gap last year.

The recent decline in concern about the healthcare system is primarily being driven by Republicans. Since 2018, there has been a 17-point drop among Republicans in negative assessments of it, compared with single-digit decreases among Democrats and independents. 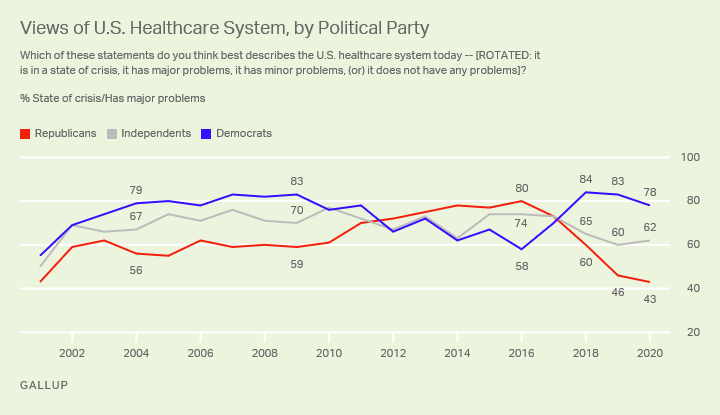 Line graph. Views of the healthcare system have often varied by political party. The last three years have seen gaps of 24 or more percentage points in the views of Republicans and Democrats in terms of whether the healthcare systems is in a crisis or has major problems, with Democrats much more likely to hold that view.

Just three years ago, during the first year of Donald Trump’s presidency, between 70% and 73% of all party groups were critical of the current state of the healthcare system. Prior to that, from 2014 to 2016, the final three years of Barack Obama’s presidency, Republicans were more likely than Democrats to view the healthcare system as being in a crisis or having major problems — and at about the same rate as Democrats are today.

Similar to the pattern seen today, Democrats were more critical than Republicans in the latter part of George W. Bush’s presidency, between 2004 and 2008, and continuing into the first three years of the Obama administration. However, at that time, solid majorities of Republicans also perceived problems with the system, contrasted with the 43% and 46% recorded the past two years.

Public Wants Government to Ensure Healthcare Within a Private System

As Americans’ views of the healthcare system have improved in recent years, their preferences for how the government should approach healthcare have been stable.

Fifty-six percent say it is the federal government’s responsibility to make sure all Americans have healthcare, while 42% disagree. For most of Gallup’s trend, which dates back to 2000, a majority have said the government should ensure healthcare for all. The exceptions occurred from 2009 to 2014, a period when the government debated and implemented the Affordable Care Act. During those years, between 42% and 50% thought the government was responsible for making sure Americans had healthcare.