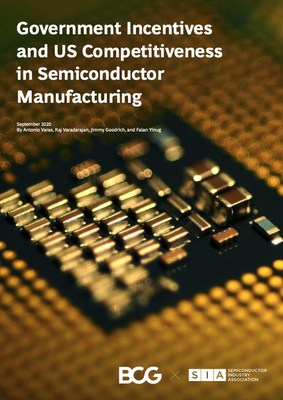 “Federal incentives for U.S. semiconductor manufacturing are an investment in America’s economic strength, national security, supply chain reliability, and pandemic response,” said Keith Jackson, president, CEO, and director of ON Semiconductor and 2020 SIA chair. “With swift, ambitious action, the U.S. government can help turn the tide of decades of decline in the share of global chip manufacturing done in the U.S., which now stands at only 12 percent, and make America one of the most attractive places in the world to produce semiconductors.”

2. The share of global semiconductor manufacturing located in the U.S. has plummeted in recent decades, mostly because competing governments offer large incentives and the U.S. does not. While U.S.-headquartered companies account for 48 percent of the world’s chip sales, U.S.-based fabs – including those operated by companies headquartered abroad – account for only 12 percent of the world’s semiconductor manufacturing capacity, down from 37 percent in 1990. Seventy-five percent of the world’s chip manufacturing is now concentrated in East Asia. China is projected to have the world’s largest share of chip production by 2030 due to an estimated $100 billion in Chinese government subsidies. Depending on the type, a new fab in the U.S. costs approximately 30 percent more to build and operate over 10 years than one in Taiwan, South Korea, or Singapore, and 37-50 percent more than one in China. As much as 40-70 percent of that cost differential is directly attributed to government incentives.

3. Robust federal incentives for semiconductor manufacturing are needed to strengthen national security, attract substantial chip manufacturing to the U.S., and create tens of thousands of American jobs. Federal manufacturing grants and tax relief totaling $20-50 billion would re-position the U.S. from an unattractive investment destination to the most attractive (excluding China) and create as many as 19 fabs in the U.S. over the next 10 years, a 27 percent increase over the current number of U.S. commercial fabs (70). Federal manufacturing incentives would create up to 70,000 high-paying jobs in the U.S., ranging from highly educated engineers to fab technicians and operators to material suppliers. The global semiconductor industry is expected to increase manufacturing capacity by 56 percent in the next decade. With a $50 billion federal investment, the U.S. is projected to capture nearly a quarter of new global capacity that is not yet in development, compared to only 6 percent with no government action.

The report also highlights several other areas where government action could help enable a thriving domestic semiconductor manufacturing sector. These include fundamental research in materials and manufacturing sciences, training to ensure the U.S. can have a robust and talented pool of workers, a continued commitment to maintaining U.S. R&D leadership, and ensuring access to global markets.

“The country that leads in advanced chip research, design, and manufacturing will have a big leg up in the global race to deploy new game-changing technologies, such as 5G, artificial intelligence, and quantum computing,” said John Neuffer, SIA president and CEO. “Leaders in Washington should seize this opportunity, level the global playing field to attract chip production, and invest boldly in domestic manufacturing incentives and research initiatives that will strengthen U.S. tech leadership for decades to come.”