As the intensity of healthcare work and COVID response efforts continue, some Colorado hospitals, healthcare systems and frontline employees suffer financially. One result of the financial challenge facing hospital systems is furloughs of Colorado doctors, nurses, administrators, executives and others.

Financial loss in Colorado healthcare stems from multiple factors — prolonged decrease in volumes of non-emergency patients since February, cancellations of non-emergency surgeries and procedures, increased costs due to plans to increase ICU and inpatient bed capacity and for essential medical supplies, ventilators, personal protective equipment and construction among other expenses, combined with loss of revenue.

Colorado doctors and nurses have shared their perspective on the furloughs, some describing the impact on their salaries and work as “frustrating and stressful” and “infuriating.” It is a complex, confusing twist that the some of the most at-risk, essential and valued community members are finding themselves furloughed during the pandemic. 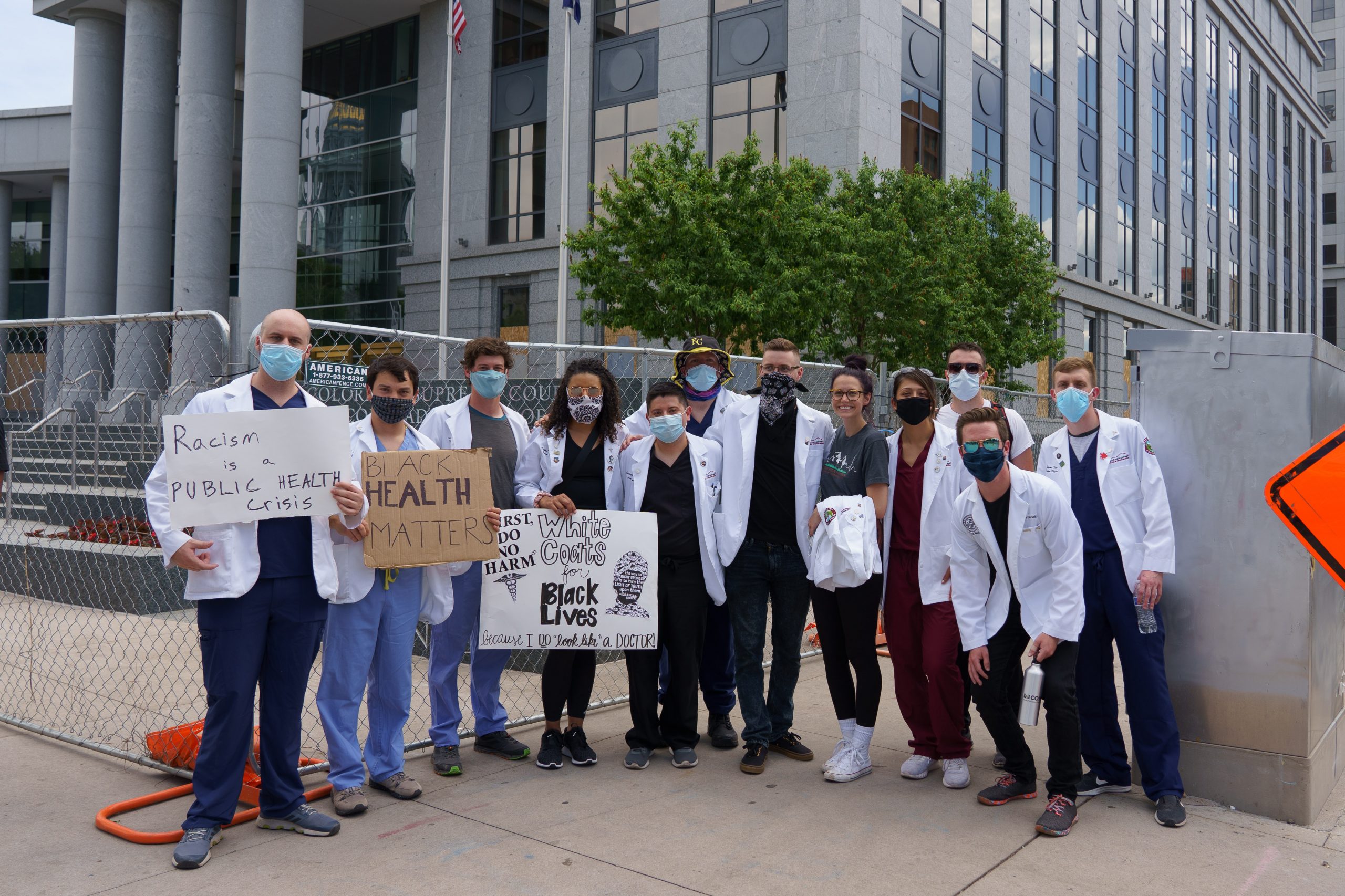 Denver doctors came out to show their support at a Denver BLM protest. Photo by Brittany Werges.

The Colorado Hospital Association (CHA) has not collected data about how many hospitals and health systems are furloughing employees, or which groups of employees are being furloughed and at what rates. Centura Health, Children’s Hospital Colorado, Denver Health, Kaiser Permanente Colorado and UCHealth currently report no furloughs or layoffs.

Lonborg explained that as hospitals faced uncertainty and lacked information about the virus in March and April, patients were discouraged from seeking care unless absolutely necessary. “We had an overnight fallout of patient volume. That revenue stream stopped,” she said. Simultaneously, hospitals were preparing for high volumes of COVID patients by increasing numbers of inpatient hospital beds, ventilators and more.

Predicted losses in Colorado are now being reevaluated, but Lonborg said that CHA believes losses will be less dire. “We do know that our [hospital patient] volumes have not returned to pre-COVID levels, despite the fact that it’s safe for patients to come back at the levels that they were in January,” Lonborg said. Decreased volumes have been tracked since July.

Colorado hospitals made immediate internal cost decisions to be able to invest, including employee and expense adjustments. “Furloughs are a very tiny component of what hospitals have done to adjust their expenses and match revenues more carefully,” Lonborg said. “Clinical staff are our lifeblood. You exhaust every alternative before you [furlough] a clinical employee.”

Spokesperson Elizabeth Whitehead shared the following in a statement from Children’s Hospital Colorado. “Hospital leadership has been committed to protecting our employees and implemented numerous cost-saving measures across the pediatric health system to help mitigate the financial impact of the pandemic.”

UCHealth spokesperson Dan Weaver explained that UCHealth asked employees to take paid time off this summer. Senior executives gave up their paid time off or took leave without pay.

Kaiser Permanente Colorado had already been making significant changes in Colorado to be more cost-effective over the past two years, according to a September 14 statement from spokesperson Nick Roper. The healthcare system paused hiring of nonclinical positions and cut discretionary expenses, among other cost reductions. Virtual care options also increased.

Weaver said, “Overall, March through June revenue decreased $252 million for UCHealth system-wide, and we saw large expenses related to our pandemic response that totaled $23 million, resulting in a total financial impact of $275 million. During this time, we received $160 million in CARES Act funding.”