At the intersection of healthcare and worker rights, Kate Walton has been spending virtually every free waking hour phone-banking for the 2020 election — work that continued right through Tuesday as voters went to the polls.

Walton, an emergency room nurse, watched in vexation as the state Legislature failed to meet for nearly seven months to grapple with the impact of COVID-19, while Republican lawmakers undermined the steps that Gov. Tony Evers and his administration have taken to combat the coronavirus.

In phone calls, “the main message I’m sharing as a nurse with voters is that I really feel our current government, both on the state and national level, has failed,” Walton says. “We’re out here doing our jobs and they’re not even going to work. So it’s time for a change. It’s time for new folks in office that’ll actually get things done and get us back on track as far as getting ahead of this pandemic.” 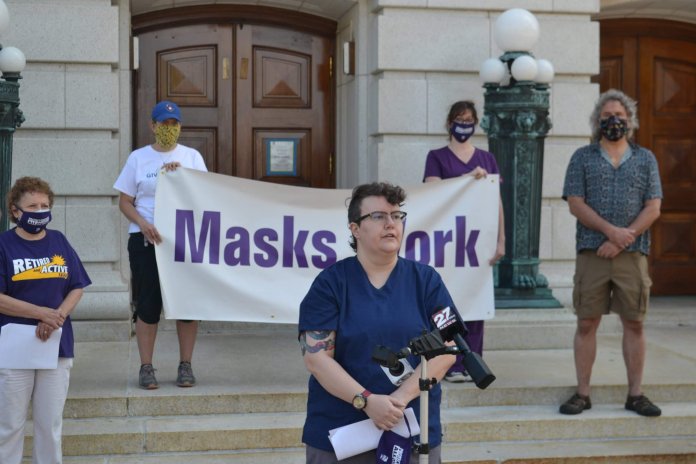 The pandemic has yet to show signs of relenting. On Election Day, the state Department of Health Services (DHS) reported 5,771 new, positive tests for the coronavirus, bringing the total number of Wisconsin residents who have been infected to 238,067. Deaths rose by 52; 2,102 people in the state have now died from COVID-19. The surge that began in September with college students, then spread to other age groups in October, has continued  and even appears to be accelerating.

While Walton was calling prospective voters, Ramon Argandona, a housekeeper at a Madison hospital and an SEIU Healthcare member, was canvassing neighborhoods, focusing on voters of Latin American descent.

The Trump administration’s mishandling of the pandemic is one of the top priority issues for Argandona and the voters he’s met.

Trump’s hostility toward immigrants, and the administration’s abandonment of the DACA program that Barack Obama as president initiated to allow the undocumented children of immigrants who have been in the U.S. for most of their lives to safely remain here, are among the other top concerns for Argandona and for the voters he spoke with.

“I’d like to know what went wrong in our country,” he says. “We need immigration reform. We’ve got almost 11 million people who really want to become citizens of the United States.”

In the canvassing calls that Walton has made, voters responded to the issues raised by the pandemic. “There’s a lot of folks out there that are really frustrated, frankly,” Walton says. “And they feel like they’re not being represented well.”

The conversations were also an opportunity to talk about more than just the political  campaigns.

“We share stories and share this, that we’re all kind of in the same place,” says Walton, who is part of a drive to gain union recognition for nurses through the Service Employees International Union’s healthcare division. “And also, I can talk with them about exercising our power as voters, not just for this election, but to build a better future and use this as a starting block to keep building.”

Walton sees progress  in how engaged people have become politically this year.

“I have seen a lot of folks that are really determined to vote no matter what, but really aren’t going to let any obstacles get in their way,” Walton says.

This past summer’s unrest sparked by the police killing of George Floyd in Minneapolis, and a series of other deaths of Black people at the hands of police as well as the police shooting in Kenosha that left Jacob Blake paralyzed, have changed the dynamic for political activism, Walton believes.

“Especially over the last six or eight months … we’ve seen that when people come together and work together, they really can effect change,” Walton says. The Black Lives Matter protests that followed the Floyd killing “is something that’s been building over the last several years, but I think this summer between that and the pandemic, people have really seen that when we band together, we have a chance to change things, and we have a chance to make things better.”

As a consequence, “voters … are really turning out in numbers that they hadn’t before,” Walton continues. “They are seeing this as an opportunity to get out there and get their voice heard. Essential workers are turning out, making their voices heard, working class voters, I think we’re seeing just record numbers. And I think part of that is because of the ways that the conversation has kind of changed this year.”