Earlier this year, global footwear giant Nike introduced an initiative to put specially designed sneakers on the feet of frontline medical professionals who spend hours in a constant state of movement for long periods of time.

On Thursday, the program reached Maimonides Medical Center in Brooklyn, which received a shipment of 5,500 pairs of sneakers and 20,000 pairs of high-performance socks. The donation is part of a $1.1 million collaborative effort between Nike and not-for-profit organizations World of Giving and Good 360.

According to a Maimonides spokeswoman, the donation will outfit the vast majority of the medical center’s doctors, nurses and other staff. 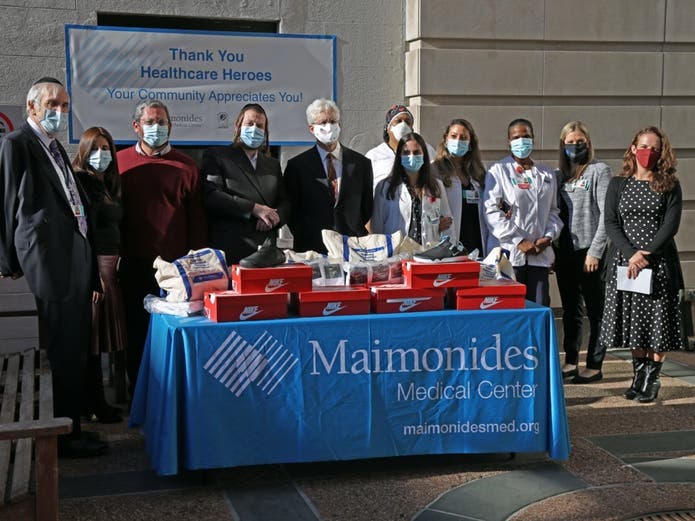 “These thoughtful contributions are a great show of support for our staff, as our #OneMaimonides team works tirelessly to deliver world-class care for our patients,” Maimonides Medical Center CEO Ken Gibbs said in a news release announcing the donation. “And they do it all on their feet.”

In May, Nike introduced the program honoring healthcare workers as professional athletes appeared in videos thanking frontline workers for their efforts. Nike announced the partnership with Good360 in an effort that will distribute 140,000 pairs of Air Zoom Pulse sneakers and other apparel to medical workers around the world. Athletes from markets such as New York, Chicago, Los Angeles and other cities joined the effort, which also included sending 2,500 pairs of shoes being sent to healthcare workers across Europe.

World Of Giving Co-Founder Mark Roizman said Thursday that the donation to Maimonides Medical Center was especially personal for an organization once based in Brooklyn. Being part of the shoe donation to the frontline workers was also important to the group to help honor the efforts of workers at the medical center, especially since the start of the coronavirus pandemic back in the spring.

Meanwhile, Good 360 is slated to distribute more than $600 million in essential goods this year, which is more than double that of which the not-for-profit donated last year.

The donation comes at a time when confirmed cases of the coronavirus are again starting to spike around New York City and the country.

As we head into a little growth in the virus, as the weather gets colder, there is a sense of, ‘Wow, I’ve got to do this again,” Gibbs said at Thursday’s event announcing the donation. “So the notion that the generosity is ongoing is very important.”