The problem wasn’t new, but the technology was.

And doctors were hoping it could help them deliver better care to patients who couldn’t be seen in person. 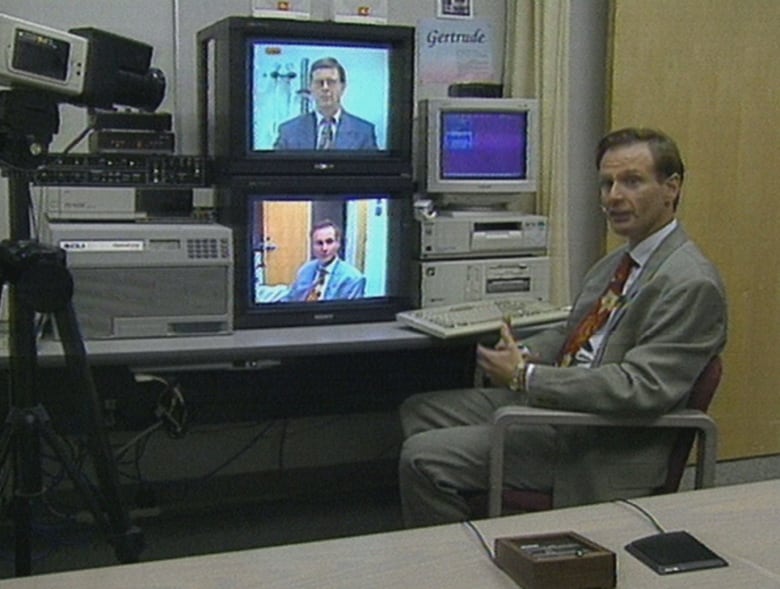 In a somewhat wide-ranging piece that CBC’s Midday featured in August 1993, viewers got a look at how technology was then helping to deliver health care from afar.

One example was a more advanced type of telemedicine that allowed patients to see doctors via a video link.

Tom Keenan, a Midday contributor who covered technology-related issues for the program, was shown sitting in front of such a setup in Calgary.

“This gear that I have in front of me consists not only of a computer and television monitors, but there’s also a television camera and a box that allows video information to be sent over the telephone line,” Keenan said, sitting in front of a desk lined with all of those devices.

“What this means is that doctors can not only see the patient — the patient can see the doctor. And if they have any kind of test results that they need to send that are visual images, they can send those directly on the line.”

Midday viewers than saw examples of the kinds of images that could be transmitted, including an X-ray diagnostic image and a close-up photo of an infected eye. Both images had been sent by a doctor from Drumheller, Alta., giving the Midday audience a sense of how the system worked.

The world of databases

Midday also talked to a physician in Halifax about another way technology was helping doctors do their job — by giving them access to the most up-to-date medical information.

Dr. Michael Murphy, the director of emergency medicine at the Izaac Walton Killam Hospital for Children in Halifax, said such databases allowed doctors to instantly glean the latest information about an issue, without having to rely on any outdated printed materials.

“The commonest database that we use is a poison information database because the field changes so rapidly,” he said.

Murphy said access to such databases was very useful when doctors were dealing with a problem less common in a particular region.

All available via keystroke

“Certainly on the East Coast, for instance, we wouldn’t have very much experience with snakebite, so that if I had a snakebite — if someone had a pet rattlesnake — I’d be able to access the database and it would tell me what I needed to do to treat that rattlesnake bite.”

Murphy then used keystrokes on his “computer board” to toggle through a series of all-text screens to show how he and other doctors in the emergency department accessed the information they needed.

However outdated the program may look to modern eyes, it was a big upgrade over the alternative sources of information at the time.

“Every textbook is three to four years outdated when it finally hits the newsstand because … the time frame from information to production, is so long,” he told Midday.